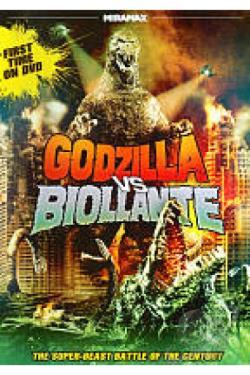 If there is one thing that goes without saying it is that each Godzilla film is a product of the decade in which it was made. The original film came out during an era where Japan was having to deal with the real life effects of atomic war. This fear lead to the creation of one of the most iconic giant monster films of all time. While in the U.S. Godzilla is viewed as a joke and something to parody by making fun of the poor dubbing. In Japan the films at times have been used as cautionary tails. Godzilla VS. Biollante cautions against abusing our knowledge of genetic manipulation. Normally I try to avoid spoilers in my reviews. I will not be avoiding them in this case. In order for me to illustrate why I love the Godzilla franchise I need to be able to show you why the stories are in fact one of the best parts of the film.

The movie opens up with the military driving Godzilla back. Godzilla ends up being forced into a volcano where he awaits the day until the volcano erupts and releases him. During the attack Godzilla becomes injured and some scientists get a hold of a sample of his scales. The scientists believe that the radioactive properties of Godzilla’s DNA might hold the secrets to beating the great beast. They attempt to create a bacteria that will only target the irradiated cells of Godzilla. As part of their research they combine the DNA from the scale with plant cells from a rose. At first it appears that their new creation is peaceful. This all changes when a volcanic eruption frees Godzilla from his tomb. Biollante’s nature changes and she becomes violent and begins to destroy the city. It is up to Godzilla and the military to destroy Biollante.

Godzilla VS. Biollante was released in 1989 one year before the Human Genome Project began their work analyzing the human genetic code. Toho’s film shows us that while DNA manipulation has the potential to aid mankind. It can also has the potential to create the biggest threat that man kind has ever faced. The film ends with Godzilla being infected by the bacteria and swimming away to recover. Just as the human’s research almost doomed them by creating Biollante the bacteria acted as their savior driving Godzilla away. Biollante may not be the most famous of the giant monsters but she will have a lasting impression on those of us who truly appreciate Kaiju. Just like the rose this monster is based on there is a beauty to it’s design and a danger inherit in it’s thorns.

I attempted to pick one of my favorite Godzilla films to open my Kaiju week. While this is one of my favorite films this movie’s sound track does leave a lot to be desired. Other monsters in the franchise have been given musical themes. It may be because they knew that Biollante would never be used again but they never wrote a theme song for the monster like they did for King Cesar or Mothra.

While I have tried to illustrate why I like the film nothing I say is going to convince you. The only thing you can do is go out and watch the film. This movie can be found in stores for about $10-15 and is well worth the cost. Even if you don’t like the story the monster combat is fun and Biollante has some unique attacks that Godzilla never faced before or after again.