With trashy humor, foul mouthed children, and an intriguing story, what else could a South Park fan ask for. I picked this game up, being a long time fan of the show, and was surprised at just how well done this game actually was. This came as a surprise because of how awful the past South Park games have been.

END_OF_DOCUMENT_TOKEN_TO_BE_REPLACED

Recently AGGN was invited to a relatively young convention in Tennessee named Con Nooga. This year marked the sixth Con Nooga. I had previously gone to the second year of the convention and was very eager to see how the convention had grown and changed. I had heard from the con’s staff that the attendance had grown over the last few years. Con attendance is expected to grow the older the con gets. In this case though it has appeared to have grown at an abnormal rate.What exactly makes this convention stand out and why has it grown as quickly as it has?

END_OF_DOCUMENT_TOKEN_TO_BE_REPLACED

This past Tuesday, a game many of us were anticipating was released into the wild. The sequel to 2010’s surprisingly well received reboot (re-imagining? prequel? I’m still not sure) of the Castlevania franchise came home. A few weeks prior to its release, scores from several review outlets were revealed. Needless to say they don’t paint the gruesome masterpiece that everyone was hoping for. Most outlets pointed fingers towards the games horrible required stealth pieces while others complained the game effectively neutered a character that was the greatest threat faced in many games we’ve grown to love.

So what happened? It seemed as if MercurySteam, the game’s developer, was doing an excellent job creating a faithful sequel to one of Konami’s core IPs. Well, it seems as if we have an answer thanks to an anonymous source inside MercurySteam whose story made it onto NeoGAF. Here are some of the revelations made by this whistle blower.

END_OF_DOCUMENT_TOKEN_TO_BE_REPLACED

What do you get when you combine Gradius and penguins? If you guessed one of the best side scroller shoot em ups then you must mean Pardius Da. Konami invented a new genre when they released Parodius, titled cute em up. Cute em ups take the shoot em up genre and turn it on it’s head. Instead of shooting at aliens or enemy plains the player will find themselves shooting at: penguins, syringes, and pirate ships with cat heads. Konami proves with this series that they have a sense of humor. The game draws on characters from other Konami games such as Vic Viper from Gradius and Twinbee.

The game is meant to be a joke, but the music is the one place that Konami took the game seriously. Anyone who has ever played the Parodius games will tell you that the games have a unique sound. The music composer for the game was only given a month to create the sound track for the first game in the series. As a by product of that he decided to remix both classical music and songs from within Konami’s own library. The opening song for Parodius Da was lifted from Gradius II and remixed to provide a classic Japanese sound reminiscent of something from Gomen Ninja.

END_OF_DOCUMENT_TOKEN_TO_BE_REPLACED 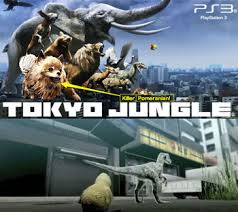 Tokyo Jungle is a unique simulator indie game found on the psn for the PS3. The game takes place in a post apocalyptic future where the human race vanished in the blink of an eye. Animals which were once kept captive by humans and placed in zoos now live in the city streets creating new ecosystems. The goal of the game isn’t to win it is just to survive. The player is tasked with controlling an animal who will need to hunt for food and find water to survive. Darwin taught us though that simply surviving is not enough. The goal of a living organism is to reproduce and contribute to the continuation of the species. Within this game you will be tasked with taking over territories and finding members of the opposite gender in which to procreate with. The game was created by Crispy’s and distributed by Sony Computer Entertainment Japan.

END_OF_DOCUMENT_TOKEN_TO_BE_REPLACED

What do you get when you combine achievements with 8-bit games? One of Nintendo’s newest titles for the WiiU does just that. No one could dispute the fact that when it comes to party games Nintendo is the king. NES Remix follows in this tradition. While the game currently only has a single player mode it begs to be played in a group setting. NES Remix hosts sections of nes black box games. Many of the challenges in this game would be included in modern games as either trophies or achievements. One example is for the original Mario Brothers arcade game which requires the player to gather 16 coins in 12 seconds. Some of the challenges however truly encapsulate the notion of a remix. Imagine a level in Donkey Kong where you are controlling Luigi and have to rescue Mario. Or a level in excite bike where you have to complete a race performing a wheelie the whole time. If the ideas portrayed in these stages intrigue you then NES Remix is going to be a perfect fit.

I really enjoyed the game as a whole but I do feel that the average player will grow bored of the game if they play it by themselves. Like many people I believe that the game needs to receive an update to incorporate a leader board. I would love to see internet rankings but I would accept a leader board within the game for local times. Nintendo while delivering on solid game play needs to learn a lesson from this that there is a market for their older games. I would love to see a sequel to NES Remix released which could encapsulate some of the best games for the famicom disk system or the snes. I realize that I am giving this game high praise and haven’t really truly critiqued it. Unfortunately that is hard to do when most of the games utilized are considered some of the best of all times. I do have one complaint. I would have liked to have seen some more obscure games from the nes library being utilized. Dynowarz for the nes is an overlooked 8-bit gem which due to it containing two different types of play styles would have complimented itself well to the game.

This is normally the part of the review where I would break my score down into specific categories. I find it difficult to do in this case. How exactly does one rate the sound, graphics, and controls of thirty year old games being emulated on a modern system? I suppose that it would be possible to play the games on their original hardware but the average gamer today does not possess these games. By that same note these games were never originally intended to be played thirty years later. This leaves us with a predicament since I could score them based off of the quality back in the 80’s or today. Instead I want you all the reader to make the judgment call. Do you personally feel that these games still hold up? For some gamers this game will pose a difficulty level that surpasses that which they are used to. For other gamers who either grew up with the titles or are fans of retro gaming Nintendo Remix will feel like coming home.

Leave a comment or send AGGN a message and let me know what titles you all would have liked to have seen in NES Remix.